If you’re in the market looking for something to help tame hair-related issues, there’s the new VS for Men I-Pro Intensive Clipper which I recently received it in the mail. As a professional grade hair trimmer, it features engineered Japanese steel blades that are specifically hardened to deliver a salon-even hair cut effortlessly.

The VS for Men I-Pro Intensive uses lithium-ion technology which gives it sustained shave time of up to 75 minutes with just a 30 minute charge time. It also has a quick charge option.

With a heavy-duty 4.0V DC motor, the VS for Men I-Pro Intensive is the brand’s most powerful clipper. It’s three times more cutting power than a magnetic motor and gives an really smooth cutting.

While many people may adore established fashion brands and menswear designers, it’s always refreshing to look at up-and-coming designers who are bringing fresh ideas to the scene. After all, today’s established designers were once yesterday’s emerging stars. Here we’ve collated a list of the top 5 up-and-coming menswear designers you should know. These are designers have what it takes to make it big, and bring a new edge to the mens fashion scene, either in terms of aesthetics or their approach to tailoring and print.

Up-and-coming Menswear Designers You Should Know

Agi & Sam founder Agi Mdumulla and Sam Cotton met while interning at Alexander McQueen and decided to start their label in 2011 after struggling to find jobs in the industry. Their gamble has paid off, with the duo introducing a successful capsule collection for UK street retailer Topman earlier this year.

It’s rare to find duo designers leading successful menswear brands -Domenico Dolce and Stefano Gabbana; Humberto Leon and Carol Lim of Kenzo immediately come to mind – but the designers behind Agi & Sam have shown over the years that they can retain a strong and cohesive vision for their brand.

Agi & Sam is known for its signature bold prints and bright hues. Their fun colour scheme doesn’t take fashion too seriously and injects a bit of ironic humour. Their aesthetic evokes comparison to Paul Smith, although the designs are more quirky, irreverent, and targeted to a younger audience.

Although New York-based menswear brand Fanmail didn’t show at New York Fashion Week 2014, its wearable designs and focus on sustainability got the attention of New York Times. The up-and-coming menswear brand is fairly new, having launched in 2013, but designer Charlie Morris has been dipping in and out of fashion for some time

What we like about Fanmail – aside from its minimalist designs and attention on detail – is its blend of function and sustainability. Morris has said his clothes are meant to be worn, not just looked at. On top of this, he strongly believes in balancing cost and environmental considerations, stating that “sustainability and transparent manufacturing has to be an added bonus, not an added cost” for consumers.

As consumers continue to put money into brands that take into account social and environmental costs, we have no doubt Fanmail will continue to be a trailblazer in the sustainable fashion industry

Up-and-coming Menswear Designers You Should Know

SEH Kelly founder Sarah Kelly gained valuable experience in the high-end couture houses on Saville Row, and her own brand epitomises all that high-end tailoring should offer: luxurious fabrics, precise cutting and a classic style for the everyday man. Ms Kelly and her partner Paul Vincent aim to make the rag trade more accessible by using high-end fabrics on casual jackets and shirts; the result is a brand that brings out the best of raw materials without compromising aesthetics.

SEH Kelly also makes some fantastic accessories, like their ventile cotton porkpie hats which belong in every gentleman’s wardrobe. From the cotton mills to the button makers and pattern cutters, the brand sources everything from the UK and is proudly British. SEH Kelly is an up-and-coming classic British menswear brand to look out for.

sUp-and-coming Menswear Designers You Should Know

Korean born and raised designer Hyun Yeu may have started ADO LES SCENTS several years ago, but he’s only recently attracted attention as an up-and-coming menswear designer. The brand focuses on innovative shapes and fabrics and is pushing an androgynous agenda in menswear. The Netherlands-based brand was recently nominated for the prestigious International Woolmark Prize, so watch out for this menswear designer in retail stores near you.

On the International Woolmark Prize website, it says: “Hyun Yeu believes that young men today have outgrown the kind of mass stereotyping known from earlier decades, and whilst he doesn’t think men should wear skirts or complex drapery, they can still show their vulnerability. Hyun Yeu says ADO LES SCENTS is utterly contemporary but taps into what he considers as timeless style.”

Up-and-coming Menswear Designers You Should Know #5:

If Andy Warhol were alive today, he would approve of British designer Kit Neale’s unashamed worship of pop culture. The brand was launched at London Fashion Week in 2012, and is now presented in the London Collections: Men at London Fashion Week. Kit Neale’s designs may not be everyone’s cup of tea, but there’s no denying that this menswear brand has big potential to make it big.

Vibrant prints with abstract references are a hallmark of this designer – in fact, all the prints are designed in-house so you can be assured you won’t find anyone else wearing the same thing. Beyond the colourful prints is a menswear designer that understands that you can’t take fashion, or life, too seriously.

Are there any other designers you think should below to this ‘Top Up-and-coming Censwear Designers You Should Know’ list? Let us know in the comments section below.

Tokelau is a game of probability. In it, players predict the future winning numbers by using certain rules and formulas. Basically, people then make use of various statistical techniques and other odds to predict how the numbers that show up on their betting slips will turn out. This kind of internet gambling originally originated in the Asian nation of Indonesia before it quickly spread to other regions of the region with the help of brokers. Over time, Tokelau became popular not only in Indonesia but also in other Asian countries such as Malaysia, Singapore, and Thailand. 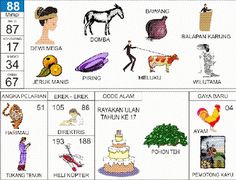 The probability of a number appearing on your bet slip does not tell you a lot about its likelihood of turning up. Likewise, there is no guarantee that a particular formula for tokling can accurately predict which team will win a game. However, with the help of certain software programs, you can at least have a better chance of predicting the outcome of the game and thus make your winnings larger.

The best way to learn how to gamble is to find an experienced togel player to play with. Playing against another human being who is a professional at playing togel online is much easier than facing a computerized opponent. You can either choose to play for money through togelsauce accounts or simply log into a free togel gambling website to place bets. These websites allow you to place bets without revealing your identity to anyone. Moreover, these websites also offer a variety of bonuses and other incentives to their players.

Online gambling has become increasingly popular among a wide range of people, regardless of age, location, or background. This is because many people find online betting to be safer and more convenient than traditional gambling where they have to walk to the casino and hand over cash. Another reason for its growing popularity is the convenience that comes with using the internet. Betting in togels can be done from the comfort of your own home. Moreover, most hotels offer live streaming that allows gamblers from all around the world to participate in the betting process.

Some togel sites also give out free bonuses and perks, which may include free spins, drawings, or free toplay games. Free toplay games include card games, video games, casino games, slot machines, and other gambling games. In fact, free to gel games are gaining rapid popularity, especially in Sydney.

There are a number of ways to play online togel games. While some players would like to just click on random selections and earn points, some players prefer to play the togel games online so that they can earn virtual cash or prizes. If you are interested in earning virtual money or prizes through togel betting, then all you need to do is to search for a reliable website that offers togel betting. Once you find one, sign up and generate yourself a new playing account.